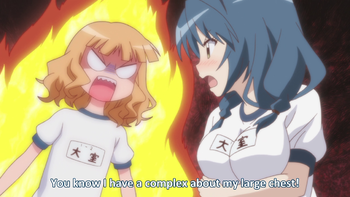 The worst part? Your envious friends will give you no sympathy.
To be truly "Godly", it is best that a female have a "boyish", that is, non-adult female body, while having a feminine presentation. [...] Because the sex characteristics of a grown woman are evil and dangerous.
— Diary of an Autodidact, Modesty Culture Part 9: Inconsistent Application of Rules

A woman has large breasts and hates them. The three most common reasons are:

Truth in Television for many women of all ages — and often even worse for trans people born female.