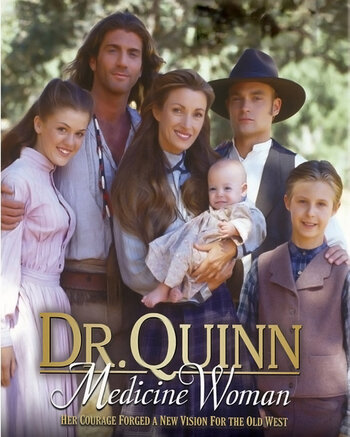 Not that Mike and Sully.
Advertisement:

Dr. Quinn, Medicine Woman is a western TV show starring Jane Seymour as Dr. Michaela "Mike" Quinn, who takes a post as a doctor in a frontier town. As a woman doctor in a post-Civil War time, she often faces prejudice against women being licensed M.D.s. This was part of the reason she moved away from her hometown of Boston in the first place.

Once in the town of Colorado Springs, Dr. Quinn becomes one of its prominent citizens, although she still has to fight for her reputation as a doctor. She meets Sully (Joe Lando), a Mountain Man, and Charlotte, a midwife who in the pilot dies and asks Dr. Mike to raise her children. Michaela thus adopts three children- Matthew, Colleen, and Brian - to provide further storyline fuel.

The series was a success for CBS, where it anchored a Saturday night line-up of family friendly shows like Touched by an Angel. However, behind the scenes, Joe Lando disliked how the show had effectively typecast him. There were even plans to have his character killed off, but a huge protest from the fanbase made this impossible. So there was a compromise that Sully was to survive, but the actor would be allowed to be absent from several episodes from the last season.

The show had a healthy run for six seasons from 1993 to 1998, which saw an overarching story of breaking gender stereotypes, frontier life, defending the Indian people from army oppression, romances, loss, and even struggles with epidemics. By the sixth season, the show had ran its course with viewers in the eyes of executives, and they brought it to an end. However, the series was able to conclude smoothly, and went on to have two Made-for-TV Movie installments - a controversial first movie which hit a few sour notes with viewers for being too removed from the spirit of the series and sparse plot-wise due to too much executive input, followed by a Grand Finale where the executives gave free rein after learning their lesson, which completely wrapped up the series by hitting points the writers did not get to cover when the plug got pulled.