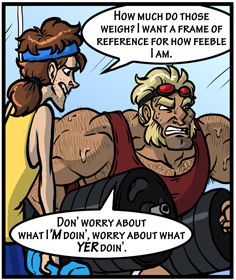 "I like a little definition. But that's just icky."
"I think huge muscles
Are fine on men, but on me
They're kinda freaky."
— Titanium Maiden from The Heroes of Crash expressing the feminine version of this trope in haiku form

A lot of body-image issues are related to/centered around femininity. Thus, we have tropes such as A-Cup Angst, D-Cup Distress, Hollywood Homely/Pudgy/Thin, Weight Woe, and so on. But the same way that thinness and breasts are associated with femininity, muscles are associated with masculinity. Thus, this trope, in which a character angsts about having not enough or too much muscle. There are two versions:

After accidentally winning the Student Council's arm wresting tournament, Kaguya panics when everyone starts cheering for how strong she is.

After accidentally winning the Student Council's arm wresting tournament, Kaguya panics when everyone starts cheering for how strong she is.