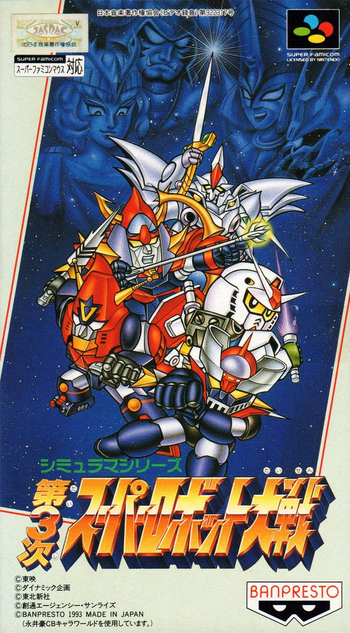 Super Robot Wars 3 was the first Super Robot Wars for the Super Famicom, and compared to its Famicom predecessor, it's still quite good to date. 3 is the first title to introduce backgrounds during combat animations, pilot and units stats and upgrades for playable units. Additionally, 3 features the first of many animated titles outside of the "Holy Trinity" of Mazinger Z, Getter Robo and Gundam.

Unfortunately, compared to anything afterwards, 3 pales in quality. However, most players are willing to forgive it for this because whatever quality it does have is evident in the obscene amounts of Shout Outs to most of its series, ESPECIALLY Gundam.

The main plot of 3 is the arrival of the "Inspectors" hailing from the intergalatic "Zuvorg Alliance" who instantly pacify the Earth, deeming them too dangerous and a potential threat to the galaxy. Londo Bell, who had been forewarned of this impending invasion in Super Robot Wars 2, are ready to fight back.

The original Super Famicom release was fan-translated by Aeon Genesis.