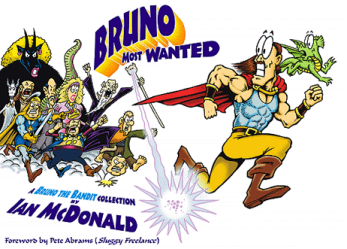 Bruno, Fiona and the enemies he made
Advertisement:

Bruno the Bandit was a long-running fantasy Web Comic started in July 1998 by Canadian cartoonist Ian McDonald (No, not that one).

Most of its humor comes from being set in a standard medieval fantasy world, but with computers, TV home shopping and vacuum cleaners. The rest comes from the protagonist Bruno Bunkleyutz (a strong but somewhat dim bandit), his smart sidekick (Fiona the micro-dragon) and his wacky family: Eunyce, his former warrior hottie Action Mom; Ambrose, his one-armed bandit father, and Elysia / Ella, his girlfriend, a fame vampire.

The comic enjoyed noticeable success for over a decade until October 2009, when the author burned out and abruptly dropped it in the middle of a storyline. Since then, Ian has been noncommittal on when or even if the comic will ever come back.

. Before, it was hosted on Keenspot.