Mother of a Thousand Young 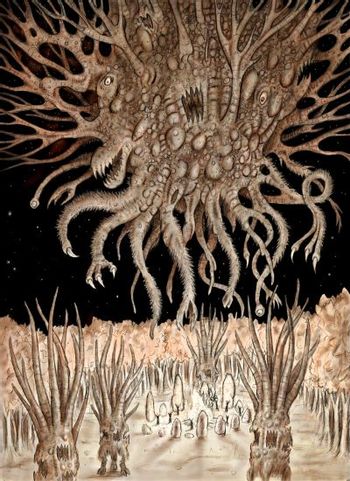 Iä! Shub-Niggurath! The Black Goat of the Woods with a Thousand Young!note The little specks down there are people; her spawn are the tree-like monsters about to eat them.
I can hear them slithering inside the walls!
I can hear them shuffling out in the halls!
Little heathens, blasphemous creatures,
Nasty vermin, every single one -
They want your blood! They need to feed!
And now Mother has brought them a treat...
— "Mommy's Little Monsters", by Creature Feature
Advertisement:

Named after H. P. Lovecraft's Shub-Niggurath, the archetype of the Mother of a Thousand Young is one Older Than Dirt, going all the way back to the Sumerian Tiamat.

The trope itself is based on the concept of a terrible monster that is mother to many, many more types of monsters, though she is usually stronger than all of them. Typically, the mother is an Eldritch Abomination spewing biological mashups one after the other, or a diabolical deceiver of would-be mates, sometimes even having the power of shapeshifting, thus allowing for greater variety of half-breed children (and infinite amounts of Shapeshifting Squick). The monsters are usually mortal and less incomprehensible in form than the mother.

The purpose of the Mother is usually to cause mayhem and destruction, or destroy an ancient foe by being the procurer of a living Diabolus ex Machina, which will cause the inevitable destruction of the civilization in question, unless the hero can prevent it.

This generally also makes it One Bad Mother.

The children of the mother are always different from her, and may even be different from their siblings. Some look like smaller, lesser versions of her. For the monster who is the first of a line of identical monsters, see Monster Progenitor. Not to be confused with Hive Queen. An Insect Queen will usually fit the trope. Can easily overlap with Explosive Breeder, Mook Maker, and Weaponized Offspring.