Took a Level in Jerkass 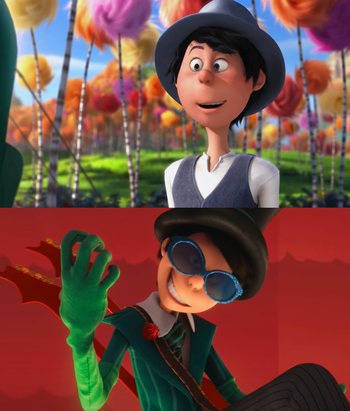 How bad can he possibly be? Well, this answers the question.
I used to be such a sweet sweet thing 'til they got a hold of me.
I opened doors for little old ladies. I helped the blind to see.
I got no friends 'cause they read the papers. They can't be seen
With me, and I'm gettin' real shot down and I'm feeling mean.
— Alice Cooper, "No More Mr. Nice Guy"
Advertisement:

When a character grows into a Jerkass over time (sometimes not much of one at all). Can be due to Flanderization, a Face–Heel Turn, a traumatic incident, or just another regular albeit unfortunate case of Character Development, which depends on who's writing said character(s). While a Jerkass growing into a Jerk with a Heart of Gold is a common phenomenon, especially in dramas, a reversal, resulting in this trope, is also common, especially in comedies.

This can also cause tropes like What the Hell, Hero?, though whether the character changes back to their kind-hearted ways, again, it usually depends on the writer. If the transition is shown as a flashback regarding a known jerk/villain, it may be a Start of Darkness.

See also Took a Level in Badass, Took a Level in Dumbass, Cynicism Catalyst, Compressed Vice and Jumping Off the Slippery Slope. When this happens to a character temporarily for the sake of the plot, the Jerkass Ball is present. The Counter Trope to Took a Level in Kindness. Contrast Bitch in Sheep's Clothing, who was always a jerk. A character taking their level in jerkassitude was genuinely nice. When a character takes this route in an adaptation, that's Adaptational Jerkass.

Not only does Nancy's baseball techniques give the Sue-zers the lead, it also causes them to be as mean and jerky as the rival team, leaving the opponents humiliated in their place.

Not only does Nancy's baseball techniques give the Sue-zers the lead, it also causes them to be as mean and jerky as the rival team, leaving the opponents humiliated in their place.