Threw My Bike on the Roof 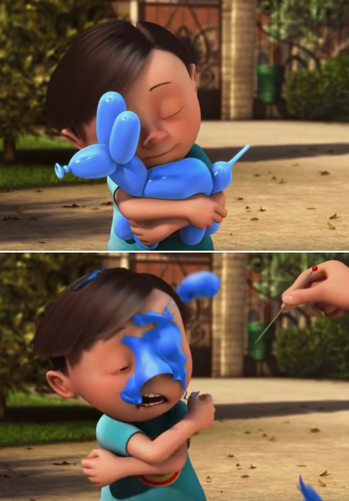 In essence, this is about destroying property just because you can... even though there is nothing to gain from it. Being an asshole for the sake of being an asshole.

A Jerkass is walking down a sidewalk when he sees a group of little kids playing with a ball, or a remote-controlled plane. He goes up to them all casual-like and feigns interest as they rave about their new favorite toy. Next thing you know though, The Bully either borrows the toy or takes it by force and then either breaks it, throws it on top of a roof or into a body of water, takes it for his own... whatever's the cruelest way he can think of to deprive the kids of their fun. After he does this, he walks away laughing at what he's done while the poor little kids cry or shout angrily at him, hopelessly unable to do anything to fix or retrieve their toy.

Of course, this can be the moment that the local badass sees this happening and makes the Jerkass regret it by beating him up to the delight of the kids and/or making him retrieve the item or compensate for the loss.

This doesn't necessarily have to be exactly like that situation though; this trope applies to all types of jerkassery committed to all kinds of helpless people regarding their items. For example, when the Jerkass's co-worker just finished his project on a computer or whatever and is about to save it, the guy goes out of his way to pull the plug of his co-worker's computer, making the co-worker lose all his hard work.

A Sub-Trope of Kick the Dog. See Keep Away for a less drastic bully tactic. Sister Trope to For the Evulz and Evil Is Petty.

Just after the apartment raid, Stansfield comes across a group of kids playing catch with a basketball. He grabs it out of mid-air, comments that "Kids should be in school," then gets into his car and drives off, taking the ball with him over their protestations.

Menes Is A Dick

Just after the apartment raid, Stansfield comes across a group of kids playing catch with a basketball. He grabs it out of mid-air, comments that "Kids should be in school," then gets into his car and drives off, taking the ball with him over their protestations.

Menes Is A Dick