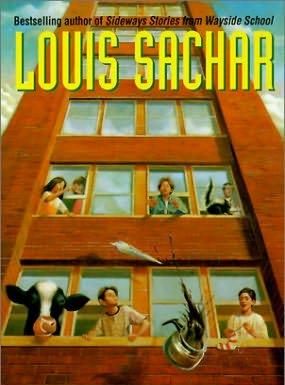 Wayside School is a children's book series by Louis Sachar (Holes) about the weirdest elementary school ever.

Most notably, it's a skyscraper with one classroom per each of its thirty stories. It was supposed to be one story high and thirty classrooms long, but the school was accidentally built sideways. (The builder said he was very sorry.)

He also forgot to build the nineteenth story. Also: the principal's name is Kidswatter, there's the group of Men in Black living in the basement, and one time the school was filled with cows.

The series focuses on Mrs. Jewls' class on the 30th floor, in which each student has their own quirks and bizarrities.

The books themselves always have thirty stories. There are four books in the main series. The first, Sideways Stories from Wayside School (1978), introduced the characters and devoted a chapter to a story revolving around each one. The second, Wayside School Is Falling Down (1989), introduced a new student to the mix but otherwise follows the same structure. The third, Wayside School Gets a Little Stranger (1995), largely abandoned the formula to present what was more or less a continuous story: Mrs. Jewls goes on maternity leave and the students must cope with a variety of substitutes in her absence. The fourth book, Wayside School Beneath the Cloud of Doom (2020), features a plotline where the students and staff of the school cope with the effects of a large, gloomy cloud that looms over the school building. There were also two Sideways Arithmetic books: Sideways Arithmetic from Wayside School (1989) and More Sideways Arithmetic from Wayside School (1994), which involve a new student from a more normal school dealing with Wayside's weirdness and mathematical Moon Logic Puzzles, including letter-substitution arithmetic.

The series manages to show an accurate understanding of the average schoolchild's perspective: the world is a huge, strange place where arbitrary things happen. In 2007, the books were picked up by Nelvana and made into an animated series, which has its own page here.