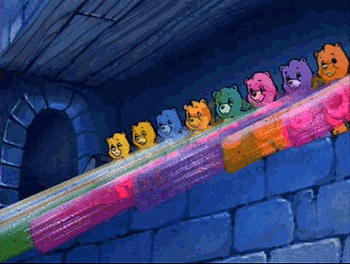 TASTE THE RAINBOW, MOTHA'FUCKA!
"Kids today are spoiled with punches to the face and flying kicks, but in the '80s cartoon action heroes weren't allowed to commit any direct violence. So how did they fight? Well, the two most common forms of combat were mind rays and passionate embraces."
— Seanbaby, "6 Super-Friends Villains That Didn't Give a Shit

Sometimes the answer to your problem isn't love and caring. It's violence. Loving, caring violence.

One character bombards the other character's mind with The Power of Love, Precious Puppies, peace, joy, rainbows and other such sweet stuff. Sometimes it will cause damage to or drive off The Heartless, The Undead, Demons, and other enemies that are Made of Evil. When used on good guys, it may bolster morale and heal them in body and spirit. For this reason it's generally used by heroes against villains.

In some cases may work due to a combination of Evil Cannot Comprehend Good and Go Mad from the Revelation. Can be a practical use of Heart, and in some cases may even cause a Villainous BSoD and Brainwashing for the Greater Good. Thus it is both a sister trope to and the polar opposite of Mind Rape.

Compare Emotion Bomb, which isn't limited to nice feelings; Mental Affair, the "adult" version of this; and Getting Smilies Painted on Your Soul, which is not as overt, if no less forceful.

Named for the "attack" used by the Care Bears, naturally. The Space Whale Aesop being: "Don't fuck with a teddy bear born with a rainbow-laser cannon in its chest."

It turns out that the Ring of Heart is the only thing that can fight Malachite.

It turns out that the Ring of Heart is the only thing that can fight Malachite.