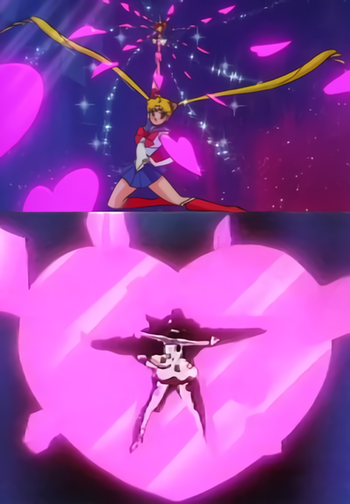 Love Hurts? More like love kills.
"Laser is not difficult
Concentrate your mind
Mutter the spell to the Mini-Hakkero tenderly
Aim at someone you don't like
Now, unleash your annihilation of love!"
— Description of Marisa Kirisame's Magicannon: "Final Master Spark", Touhou Project
Advertisement:

In a nutshell, a character who uses Love as one of their Elemental Powers.

A character with this power is fueled by or themed around innocence, love, beauty, attraction or lust. Because these are more feelings than a proper element, the abilities of the user will have to do a lot with their personality and the general tone of the series.

The signature and tell tale sign that this element is at work is when a character makes Heart Symbols show up during their moves, or if they take the place of sparks, stars and explosions during physical impacts.

If they do their own fighting, expect their style to be very feminine. They tend to be associated with slap attacks and dance moves, and suggestive butt attacks and kissing attacks.

If they're not the fighting type, a character with this element will use Intimate Healing or the Kiss of Life. May be able to purify their opponents and empower their allies or seduce and hypnotize them. Usually through magic or weapons that act like concentrated Love Potions or hyper potent pheromones in more 'realistic' settings.

The user is almost Always Female and likely to be The Heart of the team. With rare exception, good or evil, they're also very attractive. Male examples are usually with their girlfriends nearby. A solo male example might be Played for Laughs, but throughout the new 10s and into the 2020s there's been growing acceptance of neutral and positive examples of a man that's In Touch with His Feminine Side enough to use it unironically.

Sub-Trope of The Power of Love. Sister Trope to Holy Hand Grenade. Super-Trope to Projectile Kiss.

Usually the powers of a Love Goddess or Cupid's Arrow.

Compare Care-Bear Stare, The Power of Love, Heart Is an Awesome Power, What Kind of Lame Power Is Heart, Anyway?. See also Super-Cute Superpowers (this tends to look cute, but it's not really a subtrope, since this concept is "weaponized power of love").

Has nothing to do with using a heart as an Improvised Weapon to apply a No-Holds-Barred Beatdown.