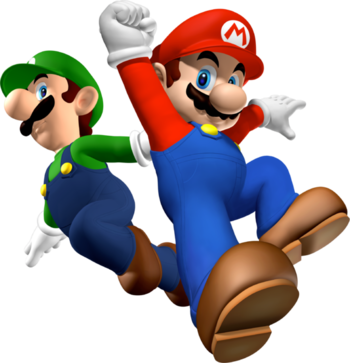 Of course, Mario hasn't completely limited himself to the realm of video games. Donkey Kong, featuring the titular ape and Mario, was one of the main recurring segments in the Saturday morning cartoon show Saturday Supercade, in which Donkey Kong was a performer in a circus owned by Mario, but he ran away and Mario pursues him to bring him back. More significantly, Mario and Luigi appeared in The Super Mario Bros. Super Show!, with live-action linking segments featuring the brothers as plumbers in Brooklyn and cartoons that showed them in the world of the games. The secondary Theme Song for the cartoons explains that they "found the secret Warp Zone while working on the drain" which is how they got to the Mushroom Kingdom from Brooklyn. Interestingly, there has never been a show made of it in the country of origin, aside from the obscure theatrical anime The Great Mission to Save Princess Peach!. There was also a critically-panned motion picture, where Bob Hoskins and John Leguizamo as the titular brothers faced off against Dennis Hopper as Koopa, a hyperevolved dinosaur from Another Dimension, intent on rejoining his own, mostly desolate world with ours. In addition, Super Mario Bros. 3 was notable for being previewed in the Fred Savage film The Wizard, whose climactic scene involved an autistic child playing several levels of the game in a competition. Nintendo announced in 2018 that it will be collaborating with Illumination Entertainment to produce an animated Super Mario Bros. movie, set to be released on April 7th, 2023. The animated movie is set to feature Chris Pratt as Mario, Anya Taylor-Joy as Princess Peach, Charlie Day as Luigi, and Jack Black as Bowser. Also featured is Keegan-Michael Key as Toad, Seth Rogen as Donkey Kong, Kevin Michael Richardson as Kamek, Fred Armisen as Cranky Kong, and Sebastian Maniscalco as Spike.