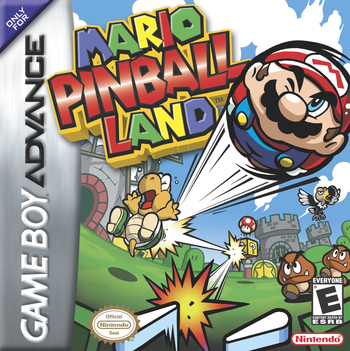 It's Super Mario 64 with flippers!
Advertisement:

In Mario Pinball Land, Koopa King Bowser has used a hijacked carnival gadget to kidnap Princess Peach (again), so Mario gives chase using the same gadget. Since the invention smushes people into living pinballs, Mario must now bounce, roll, and smash his way past Bowser's obstacles, collecting Stars to confront various Bosses until he can unlock the final confrontation with the Koopa King. Fortunately, Mario can use various power-ups to help in his quest, and Yoshi's eggs are sometimes available for multiball action.

Game-wise, Mario Pinball Land is divided into more than 30 screen-sized pinball tables, many of which are connected to each other by various doors and chutes. As with Fuse's Pro Pinball games, each table uses pre-rendered graphics and sprites, making this one of the most beautiful Game Boy Advance titles. Unfortunately, the game received mixed reception from most players; while Pinball Land is fun and not too difficult, it is also relatively short, and the biggest challenge is the game's annoying tendency to completely reset a table's status if Mario leaves it even for a moment.