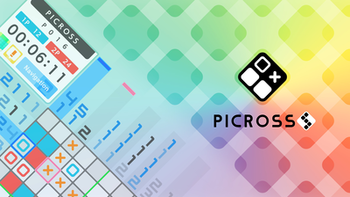 Picross is a Nintendo picture puzzle series. In it, the player discovers hidden pictures by filling in blocks in a grid. The numbers along the top and left side of the grid provide clues as to which blocks should be filled in.
Advertisement:

, and are also called nonograms and other names

The games in the Picross series are: