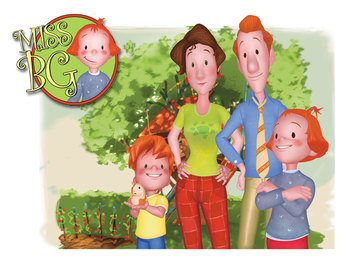 Miss BG (2005-2008) is a joint Canadian/French computer-animated series by Breakthrough Entertainment that aired on TVOntario and France 5 from 2005 to 2008 for 52 episodes. It is based on the Gudule et les bébés French children's book series published by Hachette-Jeunesse, authored by Fanny Joly and illustrated by Roser Capdevila, and developed for television by Kevin Gillis, creator of The Raccoons.

The series centers on a young, energetic girl named Bella Gloria Baxter, known better as "BG", and her adventures with her younger brother George and her best friends, Alex and Gad, and on-and-off rival, Brittany-Ann.

Tropes the show include: