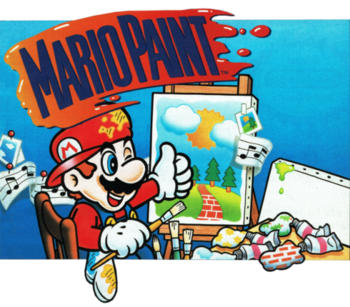 "When I was eight, dude,
I couldn't wait, dude,
to play this great new game called Mario Paint!
A title I wish every house had,
it came with a mouse and a mousepad!"
(...It was a big deal back then.)
Brentalfloss, Mario Paint WITH LYRICS

Mario Paint was released in 1992 for the Super Nintendo Entertainment System. It was the first game to use the SNES Mouse peripheral, and came bundled with it.

The software isn't really a game so much as an art tool: there's making images using brushes, stamps, and patterns; creating animations; creating music (which could be used in the animations); loading pre-defined images to color or edit in any other manner; and creating custom stamps. Mario Paint also had a well-known minigame called "Coffee Break" (also referred to as "Gnat Attack" in the manual), in which you had to swat flies to progress through the level, going on forever until you lost all of your lives from getting hit by the flies. This minigame would later be featured in WarioWare, Inc.: Mega Microgame$!.

It is worth noting that the first animated Homestar Runner cartoon was animated using Mario Paint. note  They went back to using Mario Paint for the toon 'Strong Bad is a Bad Guy' and for short clips on Twitter during 2018. They attempted it for the site's 20th anniversary short film in 2016, but stopped after realizing how tough it was with just animating one character.

Any videos of the music-making program can go here.

Tropes present in the program as a whole:

The mini-game features examples of: