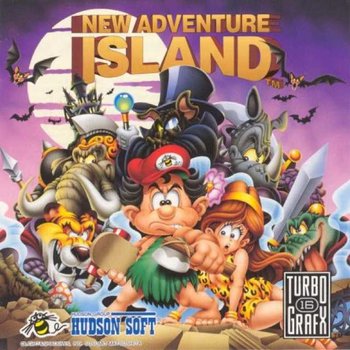 Hudson's Adventure Island, known in Japan as Takahashi-Meijin no Boukenjima (meaning "Master Takahashi's Adventure Island"), is a 1986 side-scrolling platform game by Hudson Soft for the MSX and Nintendo Entertainment System, where the player controls a tropical warrior named Master Higgins (known in Japan as Takahashi-Meijin, after Hudson's spokesman Toshiyuki Takahashi) on his quest to rescue his "favorite lady" (wife in later games) from King Quiller (AKA the Evil Witch Doctor), and stuff his face full of whatever food he can find, lest he drop dead. The more well-known NES version is a licensed re-release of the original Wonder Boy with the characters swapped out, which was possible thanks to the fact that Wonder Boy developer Westone was an independent company from Sega and owned the code to the game, despite the fact that Sega owned the Wonder Boy trademark.
Advertisement:

Original sequels were made by Hudson Soft without Westone's involvement. They include:

Hudson also commissioned a 51-episode anime TV series, "Bug-tte Honey" (lit. "Honey the Bug"), which was produced by TMS Entertainment and aired in 1986-87 on Nippon TV. It features character designs by Minoru Maeda, who also worked on Dr. Slump and Dragon Ball, giving the show a very Akira Toriyama look. The plot centers around Takahashi (Master Higgins) being kidnapped and his girlfriend, Honey (the bee-like fairy who granted Higgins temporary invincibility in several games), trying to rescue him by enlisting the help of three Earth kids. This anime in turn inspired its own Family Computer game in 1987. Neither the anime nor the spinoff game were released outside Japan (although it was shopped around under the title of Honey Bee in Toycomland). There was also a theatrical anime film.