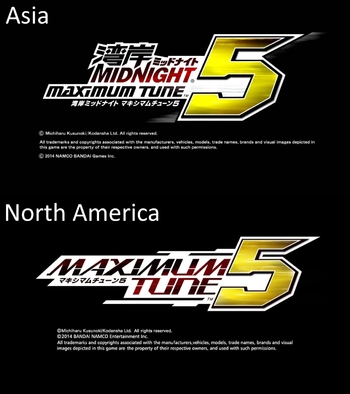 To be fair, those who don't speak Japanese would likely call it Midnight Maximum Tune otherwise.
Advertisement:

Translating titles makes sense. After all, an English audience will have a better idea what a film is about when it's named Seven Samurai rather than Shichinin no Samurai.

But that doesn't mean you can't change the title around if it's already in English (or whatever the language of the market). There are multiple reasons for doing this: maybe it's a sequel and the original never came out, it uses an idiom or cultural reference that won't be understood overseas, a Pun-Based Title that does not translate into other languages, somebody else already owns a trademark on that name in your country, the original title doesn't make much sense in the country it's being released in, or maybe your marketing department has just decided that having lots of different names for the same thing is better. And sometimes a famous actor from that market is in the movie, and the makers want that to be highlighted.

Most of this is Executive Meddling from the assumption that Viewers Are Morons, and it causes no end of confusion when fans from different countries try to discuss the same thing. Compare Homogenous Multinational Ad Campaign and American Kirby Is Hardcore. Contrast with Censored Title, where a work has its title changed due to obscenity reasons, not marketing or legal reasons.

Dub Name Change is this trope for in-universe terminology and character names. If the different names are instead given by different factions In-Universe because the real name is unknown/unpronounceable/in a different language to them, that is a case of Reporting Names.

If a title is in a foreign language, the translated title may be accurate, or may be a Completely Different Title. See Dolled-Up Installment and Translation Matchmaking, when the new title makes one installment "part of" another popular work.