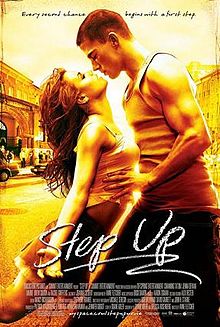 Step Up is a film franchise based around dancing, mostly hip hop / breakdancing. Each film follows the story of a dancer who uses their talent as a form of expression and their subsequent romance with a fellow dancer, generally from a different class background. The films are a bit of a Cliché Storm, following a pretty consistent formula particularly when it comes to the love story aspects, but the series' clear focus is on the spectacular dance numbers that grow more and more elaborate with each new installment.

There are currently six Step Up films:

Step Up (2006) follows teen delinquent Tyler (Channing Tatum in his breakout role), a talented hip-hop dancer who ends up forced to do community service at the fictional Maryland School of the Arts after he is caught vandalizing school property. However, his life changes when one of the students, Uptown Girl Nora (Jenna Dewan), enlists him to be her partner for her senior performance after her regular partner is injured. This first installment established the series' long-running theme of inter-class conflict, particularly in relation to the divide between hip-hop (considered "lower class") and more "traditional" dance forms like ballet or contemporary (taught at the "upper class" private arts school). It's also the darkest installment of the films, being the only one where a character dies during the course of the story.

Step Up 2: The Streets (2008) follows Andie, a tomboy from Tyler's neighborhood with her own delinquent streak who is forced to choose between attending MSA and being shipped off to Texas to live with her aunt. However, her new life at the school affects her relationship with her friends from her neighborhood, who as a dance crew are the champions of a local hip-hop dance competition known as "The Streets." After most of her old friends reject her, Andie teams up with her new friend Moose and MSA's local Big Man on Campus, Chase, to put together a new crew to compete in The Streets. This film marked the series' turn towards hip-hop dancing as a primary focus rather than the balance of hip-hop and contemporary in the previous installment and introduced Breakout Character Moose, who has featured in every film since. It is also the only film in the series to have the female lead as the primary protagonist.

Step Up 3D (2010) follows Moose from the previous film as he starts his freshman year of college at NYU, leading him to meet up with his old friend Camille (Tyler's foster sister, possibly biological sister, from the first film) as well as the film's real protagonist, Luke, leader of the House of Pirates dance crew. Luke enlists Moose as a member of his crew in preparation for the upcoming World Jam competition, where they face off against their rivals, the House of Samurai, whose leader Julien used to be friends with Luke before they had a falling out. However, problems arise when Luke discovers his teammate and love interest Natalie is not all she appears to be. As the name indicates, this was the first film in the series to be shot in 3D, with a number of sequences designed to take advantage of technology.

Step Up: Revolution (also known as Miami Heat) (2012) follows Sean, the leader of the Mob, a Miami-based dance crew that stages elaborate flash-mobs. Through his day job as a hotel waiter, Sean meets Emily, the hotel owner's daughter and a contemporary dancer auditioning for a spot at a prestigious dance academy, and invites her to join the Mob. However, the group then finds out that Emily's father is planning to destroy their neighborhood, causing the group to use their flash-mobs as a form of protest art to save their homes even as their actions threaten Sean and Emily's budding romance. This film marked a return to the series' roots of blending hip-hop and contemporary dance styles, although the emphasis is still largely on hip-hop, and also has perhaps the highest amount of fanservice in any of the films.

Step Up: All In (2014) continues Sean's story as he and the Mob struggle to get by as working dancers in L.A., ultimately resulting in everyone but Sean returning to Miami. However, when Sean hears about a dance contest on VH1 for a three-year contract to perform at a hotel in Las Vegas, he enlists Moose to help him put together a new crew consisting entirely of characters from the previous films. This includes Andie, protagonist of The Streets, who had been forced to quit dancing after a knee injury and is now ready to get back in the game, although her fears of getting injured again form her subplot for the film. Naturally, tensions arise when Sean learns that the Mob has joined the competition, although the real problem is the Grim Warriors, a crew that neither group likes. This film returns to the dance battle structure of The Streets and 3D after the flash-mobs of Revolution, and is the first film in the series to feature both recurring male and female leads.

Step Up: Year of the Dance (2019), also known as Step Up China, is a spin-off film that sees a massive divergence in comparison to the other five films, taking place in Beijing and understandably featuring an all-Chinese cast.

A drama web television series based on the films called Step Up: High Water premiered on January 31, 2018 on YouTube Red (now YouTube Premium), and was renewed for a second season that premiered on March 20, 2019. Tatum and Dewan are executive producers on the series. YouTube cancelled the show alongside most of their scripted originals, but the series was later picked up by Starz for a third season, airing the prior seasons second-run.