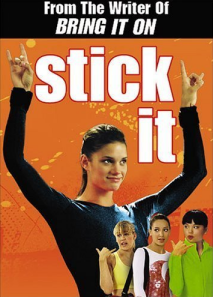 A 2006 teen sports dramedy written and directed by Jessica Bendinger (Bring It On), starring Jeff Bridges and Missy Peregrym.

Stick It is the story of 17-year-old Haley Graham (Peregrym), a former world-level gymnast who is thrust back into the world of gymnastics as a sentence from her run-in with the law for vandalism. She ends up at Vickerman Gymnastics Academy, where Coach Burt Vickerman (Bridges) persuades her to compete in an upcoming invitational, and to use the winnings to help pay off some of the property damage. Haley's presence is badly received by her fellow competitors, and so instead of practicing with the group, she practices on her own out in the old gym. Haley likes to perform wild and extreme tricks, not "cookie-cutter routines", but has a hard time controlling them, and sticking her landings, and ends up having to go to Vickerman for help.