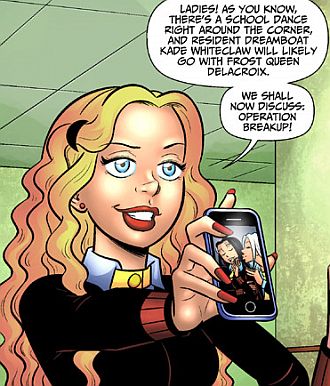 How ''pleasant.''
"I take it as a rule of nature that all American high schools are ruled by a pack of snobs, led by a supremely confident young woman who is blonde, superficial, catty, and ripe for public humiliation. This character is followed by two friends who worship her and are a little bit shorter."
— Roger Ebert, review of Sleepover
Advertisement:

Take your typical setting involving teenagers—say, a High School—wait an establishing scene or two or three, and there she is. See that attractive blonde cheerleader looking down her nose (often literally) and sneering at the frumpy girl in glasses? That's her.

The Alpha Bitch is living, breathing evidence that Popular Is Evil. From stealing your crush to humiliating you in front of the whole school, there is no low she won’t stoop to in order to oppress her dorky classmates and assert herself as the queen. She will often win Homecoming Queen or Prom Queen in a landslide vote. Often times, she is the authority of the cheerleading squad and decides who's on and off the squad. After all, who needs a coach?

The villainess of many a Teen Drama, the Alpha Bitch is the Distaff Counterpart to the Jerk Jock or Big Jerk on Campus, and usually his girlfriend;note  sometimes he's also her attack dog what he does with his fists, she does with a sharp tongue and sharper manipulation. She is often surrounded by a fawning Girl Posse who suck up to her and act as her faithful minions. She's very likely to be a Narcissist, a Drama Queen, a fashionista, a Valley Girl, a Bratty Teenage Daughter, a Daddy's Girl, an Attention Whore, and/or a Proud Beauty. May also be (or be close to) one of the cheerleaders.

She's also usually the scion of a wealthy and influential family, the star of the school or head sister of the influential college sorority house, thus providing her a network of local celebrity, influence and wealth to exploit. She's also quite the seductress, and consequently, all the boys fight amongst themselves—sometimes literally—to be her oppressed boyfriend. And to top it off, she's also very good-looking. All this leaves her with the belief that she can do whatever she likes without consequences. Unfortunately, she's often right; the Powers That Be are not immune to her family's wealth, connections, and influence, and they can and will be corrupted or coerced into overlooking her bad behavior.

Her natural enemy is the Cool Loser heroine. Whenever their eternal, jealousy-fueled struggle over possessions, boyfriends, and status is sparked anew, quarter will neither be asked for nor given.

Her foil, however, is the Class Princess, who’s as beautiful and popular as she is, if not more so, except that she’s nice and sweet to everyone instead of bullying them. The AB will see the Princess as a threat to her throne, as everyone easily prefers the Princess to her, and try to damage the Princess’s reputation before she overthrows her.

Usually the Veronica in a Betty and Veronica situation, if she's even presented as a love interest at all. Frequently on the Snob end of Slobs Versus Snobs. It's a Costume Party, I Swear!, the Prank Date, and the Party Scheduling Gambit are just some of the many nasty tricks she plays. Often receives her comeuppance at the hands of a member of her own Girl Posse in a Backstabbing the Alpha Bitch moment, or when the Cool Loser fights back (sometimes with an Engineered Public Confession). Normally joined by a Beta Bitch who assists her in her various cruel deeds.

If given some Character Development, she will become a Defrosting Ice Queen and grow into a Spoiled Sweet, or a Lovable Alpha Bitch. This might come from a reveal that she's actually hiding the fact that she's very easily-embarrassed. This trope is probably so common because everyone who wasn't homeschooled knew someone like this... or was one. It self-perpetuates because girls who want to be popular will copy what works on TV. They might even become the mask.

Once she's all grown up, she's likely to turn into an Obnoxious Entitled Housewife, treating service workers and her neighbors (especially her fellow mothers, some of whom probably went to school with her) the same way she treated her classmates in high school.

Most examples fall into one of three types:

Also note that while most of the aforementioned Passive-Aggressive examples can also be insulting if they want to, it's usually something minor in the story they do to help reveal their true nature to the audience. They tend to find a lot more value in manipulating others for popularity than they do in just abusing people and being an all-around unlikable bully like the Aggressive examples. Which type she is basically just depends on what her goal is, whether it'd be wanting to use the entire school to help her rise up or just wanting to use brutality to bring others down.

If she's not the cheerleader type with the fake smile, but is the (usually) unglamorous girl who will fight to be the best in her class, she's the Academic Alpha Bitch. Though almost always a she, rare male Alpha Bitches (called Alpha Bastards) do exist, but they're just that — rare. They're distinct from the Jerk Jock in that they're mainly catty and manipulative, rather than physically threatening, although if a Jerk Jock is preppy enough, he can overlap with the Alpha Bastard. However, if the Alpha Bastard is a popular Jerkass who rules the school, regardless of his abilities or his school activities, they will become the Big Jerk on Campus.

The Alpha Bitch is the female version of Big Jerk on Campus, who does not necessarily have to be a Jerk Jock, just like she does not have to The Cheerleader. Like the Alpha Bitch, this guy can be aggressive, passive-aggressive, or a mix of both, and can qualify regardless of his athletic ability, as long as he is good-looking, popular, and a huge Jerkass.

Not to be confused with the Prison Alpha Bitch, found exclusively in women's jail, whose methods of bullying are much more brutal and whose goal isn't social status but outright dominance. The reason this character type is hated more than other Jerkass characters may have to do with her privilege and looks, see also Jerk Sue. Contrast Unpopular Popular Character.

ALSO not to be confused with literal Alpha Bitches.

on The Other Wiki for the Real Life information of this trope.

And yes, alpha bitches do exist in real life. No further elaboration is necessary.