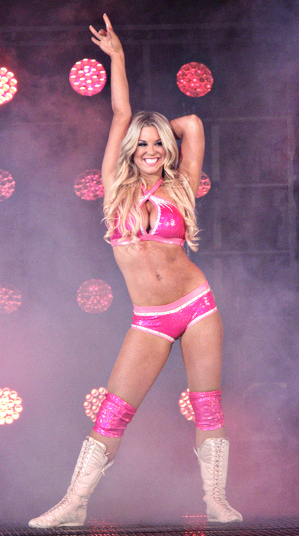 She's a hot mess!
Taryn Nicole Terrell (born December 28, 1985 in New Orleans, Louisiana) is a professional wrestler, actress, stunt woman, and model. From 2007 to 2010, she would make appearances in Florida Championship Wrestling. She signed on to WWE from 2008 to 2010 under the ring name Tiffany as a wrestler and occasional General Manager. Starting in 2010, she made appearances on the Independent Circuit. In 2012, she joined TNA and its territory Ohio Valley Wrestling under her name Taryn Terrell as a referee and wrestler, eventually winning the Knockouts Championship in late 2014.
Advertisement:

She has posed for Playboy, Maxim, and other ventures.

She retired from wrestling in 2018.