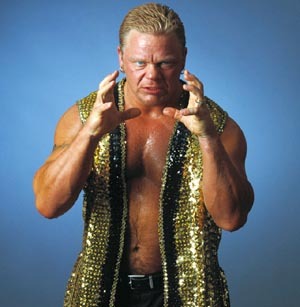 The Star Quarterback.
"In the tradition of Lou Thesz. In the tradition of Jack Brisco, of the Brisco Brothers, of Dory Funk Jr., of Terry Funk, the man who will never die. And to the REAL 'Nature Boy' Buddy Rogers, upstairs tonight. From the Harley Races, to the Barry Windhams, to the ... Ric Flairs. I accept this Heavyweight Title. Wait a second. Wait a second. Of Kerry Von Erich, of the fat man himself, Dusty Rhodes, this is it tonight, dad. God, that's beautiful. And Rick Steamboat, and they, can all... KISS... MY... ASS!"
—"The Franchise" Shane Douglas, August 27, 1994
Advertisement:

Troy Allan Martin (born November 21, 1964) is an American Professional Wrestler from Pittsburgh, PA best known for his work in ECW as Shane Douglas. He debuted in 1982 and would compete for WCW, WWE and other promotions before arriving in ECW in 1993. He would hold the NWA ECW Heavyweight Title/ECW World Heavyweight Title

twice and made history when he threw down

, marking ECW's separation from the NWA.

He had a brief run in WWE in 1995 as Dean Douglas (a murderous academic), where he suffered from Kliq politics, and had the shortest WWE Intercontinental Heavyweight Title

reign on record, a mere 11 minutes or so, entirely at WWF in Your House 4: Great White North, October 22, 1995. He jumped to WCW in Summer 1999 and would have one run with the WCW United States Heavyweight Title

, this time with Buff Bagwell. He would go on to compete for TNA, MLW and other promotions.