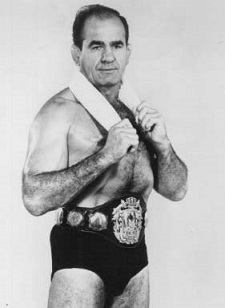 The greatest ever. Period.
"When people ask how I stay so active and look younger than my years, or some cheeky bastard asks how I keep up with a wife 30 years my junior, I tell them my secret is choosing my ancestors wisely. I don't think they'd believe the truth: because I am a wrestler."
Advertisement:

and for inventing such moves as the Lou Thesz Press, later used by everyone from "Stone Cold" Steve Austin to Mickie James, the STF, popularized by Masahiro Chono, who in turn came up with the STS variation used by John Cena, and the powerbomb, popularized by Sid Vicious, Big Van Vader, and Kevin Nash and used by too many wrestlers to start listing them here. He started his career in the 1930s and had his last match, against Chono, one of his students, in 1990. While he was primarily a singles wrestler, he also held the NWA (Vancouver) Pacific Coast Tag Team Title

with Jackie Fargo. He also competed for the Lucha Libre Internacional promotion in Mexico (governed by the UWA), for Jerry Lawler's CWA promotion in Memphis and won the Legends Battle Royal at a WWE house show at the Brendan Byrne Arena in East Rutherford, NJ on November 6, 1987. He was inducted into the Wrestling Observer Newsletter Hall of Fame in 1996.