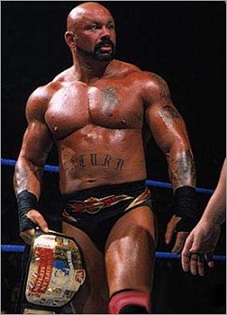 Perry Arthur Satullo (born October 25, 1966 in Cleveland, OH) is an American Professional Wrestler best known for his work in the 1990s and early 2000s as Perry Saturn. He started his career in 1990 after a stint in the U.S. Army. He was working as a nightclub manager in Boston, MA and convinced the bouncer George Caiazzo to try wrestling. Caiazzo did and became John Kronus, since Cronus is the Greek equivalent of the Roman god Saturn. They became The Eliminators and would compete for Jerry Lawler's USWA in Memphis before arriving in ECW in 1995. They would hold the ECW World Tag Team Titles

three times before Saturn followed Raven and Stevie Richards to WCW in Fall 1997. There, Saturn would hold the WCW World Television Title

once and the WCW World Tag Team Titles

twice, once with Raven and once with Chris Benoit. Saturn, Benoit, Dean Malenko and Eddie Guerrero would jump to WWE in January 2000. He would hold the WWE European Heavyweight Title once and the WWE Hardcore Title

twice. He has also competed for New Japan Pro-Wrestling, TNA and many independent promotions.