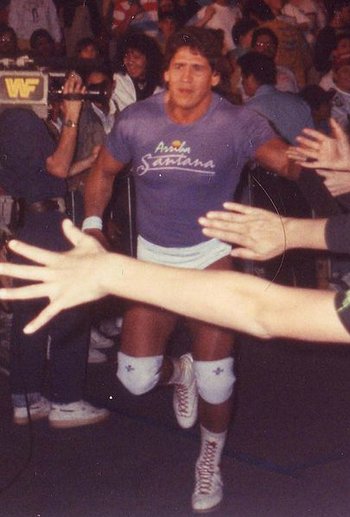 Merced Solis (born May 10, 1953) is a semi-retired professional wrestler from Mission, Texas best known for his work in WWE in the 1980s as Tito Santana. He started his career in Florida in 1977 and also worked in Georgia, WWE, the American Wrestling Association, Southwest Championship Wrestling in San Antonio, and the Funk family's Western States Wrestling promotion in Amarillo, TX before making his home in WWE. Santana is a 2x WWE Intercontinental Heavyweight Champion

, holding the belts the first time with Ivan Putski and the second time with Rick Martel as Strike Force and a 1x NWA ECW Heavyweight Champion

(see below under The Cameo). He was inducted into the WWE Hall of Fame in 2004.