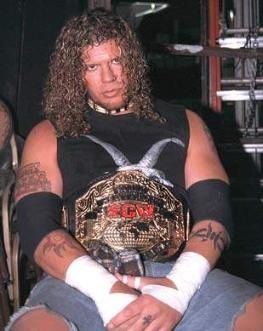 Let's talk about Raven, yes, what about you Raven?

Raven has played an interesting role in every U.S promotion over the last twenty years or so. His "mind for the business" is always touted, along with the gift of gab and a predilection for stop signs. He is one of the unsung heroes of the Attitude Era, and was instrumental to ECW becoming the sensation it became. And he did it in all three major companies (ECW, WCW, and WWE) as we've said.

He's a card-carrying member of MENSA with an IQ of 143 (the highest possible score is 160) and, according to Paul Heyman, Raven is the only person in the industry to match his skills as a booker. He walked away from a job with WWE Creative around 1994: he was being groomed to be a big shot, but between his on-again off-again substance abuse problems and thinking he's smarter than everyone else in the room, he didn't make for a good soldier. And taking Vince McMahon to court didn't help.

He used to have a video podcast on his YouTube channel, though Raven often brings up his ADHD whenever he goes off on a tangent. (Imagine Raven as a tangentleman.) He currently hosts a nonsensical podcast, The Raven Effect, on The Jericho Network: most of it is non-wrestling topics, like the "Flat Earth" conspiracy theory. There is an episode with Billy Corgan, which was a pretty big get for a fledgling podcast.

Raven now has a series with Kayfabe Commentaries, Raven's Restler Rescue, where he does just that: He takes an indie wrestler and tells them what they need to change in order to be successful.