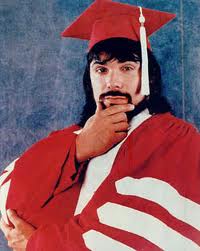 Lanny Mark Poffo (born December 28, 1954) is a semi-retired Canadiannote He was born in Calgary, Alberta.-American Professional Wrestler and manager best known for his time in WWE in the 1980s and early 1990s. He debuted in 1973 and worked for various National Wrestling Alliance territories as well as his father Angelo's outlaw promotion International Championship Wrestling, which ran in direct opposition to Jerry Lawler's CWA promotion in Memphis.

He was usually a Jobber in WWE, until he turned heel and became The Genius. In this role, he was a manager for Mr. Perfect and The Beverly Brothers.

Among his in-ring achievements, he was a former 3x ICW World Heavyweight Champion