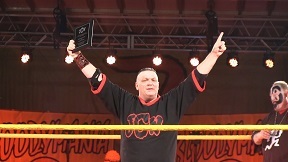 Being inducted into the JCW Hall of Fame. That's Violent J on the right.
Advertisement:

Kevin Canady (b. June 24, 1969) is an American Professional Wrestler and trainer as Mad Man Pondo. He debuted in 1989, working a traditional style until he and friends 2 Tuff Tony and Corporal Robinson decided to pursue a hardcore style. He has wrestled for CZW, IWA Mid-South, Juggalo Championship Wrestling, CHIKARA, TNA, some National Wrestling Alliance territories, and numerous other independents in the U.S. and elsewhere.

Among his in-ring achievements, he is a former IWA Mid-South World Heavyweight Champion

"Tropes of a Madman":