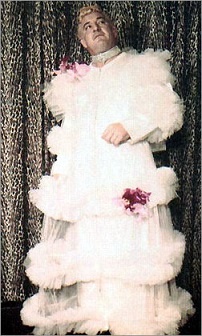 "Get your filthy hands off me!"
— Gorgeous George
Advertisement:

The Fountain of Expies in Professional Wrestling.

George Raymond Wagner (March 24, 1915 – December 26, 1963) was an American Professional Wrestler as Gorgeous George. Trained by Farmer Burns, he started his career in 1932 on the carnivals circuit under his own name. He was inspired to develop a flamboyant image by reading an article in Vanity Magazine about the wrestler Lord Patrick Lansdowne who would come to the ring wearing a velvet robe accompanied by two valets. He started dressing like that and heard some women in the crowd call him "gorgeous." He took it and ran with it, creating the first truly great gimmick in pro wrestling, one of the the first gimmicks that wasn't a generic "athlete," a farmer or a Foreign Wrestling Heel. He helped sell a lot of televisions in that industry's early years. As for his in-ring achievements, he was a 1x AWA (Boston) World Heavyweight Champion

George Wagner is the Trope Namer for:

"Read my tropes, you peasants!":