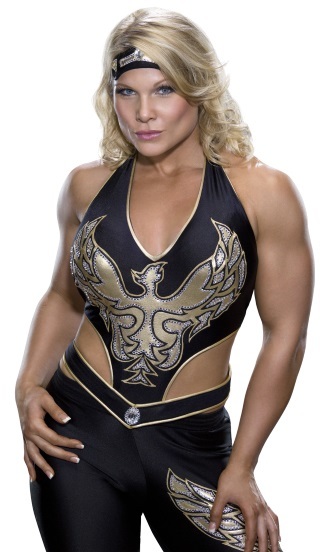 Gorgeous, smart and can lift a man across her shoulders
Advertisement:

Elizabeth Kocianski-Copeland (born on November 24, 1980 in Elmira, New York), also known as Beth Phoenix, is a female professional wrestler who worked for WWE, and unique among them for her power-beauty glamazon gimmick and being one of the few who trained to be a wrestler from the beginning, going as far as being the first woman varsity wrestler in her high school.

With her amateur wrestling skill and physical strength, she quickly developed in one of the best female wrestlers in business while working for a multitude of promotions such as Cleveland All Pro Wrestling, Apocalypse Wrestling Federation (women's champion), GLORY (first champion), Kiryoku Pro and Far North Wrestling (cruiser weight champion). It earned her a contract with Ohio Valley Wrestling, an invitation to SHIMMER and eventually the WWE Women's Championship three times and the Divas championship once. On the October 29, 2012 edition of Raw, she was fired by Vickie Guerrero, ending her six-year tenure with the company. She was inducted into the WWE Hall of Fame in 2017, and is married to Adam "Edge" Copeland. She made a return in 2018 to participate in the first Women's Royal Rumble, giving her the distinction of being the first WWE Superstar to compete in both a Men's and a Women's Royal Rumble. On the March 18 2019 edition of RAW, Beth announced that she was coming out of retirement to team with old friend Natalya Neidhart in order to challenge Bayley and Sasha Banks for the WWE Womens Tag Team Championship at WrestleMania 35.

The Miz is extremely confident that Maryse could defeat the newly returned Beth Phoenix, known for being one of the strongest women on the roster prior to her retirement.

The Miz is extremely confident that Maryse could defeat the newly returned Beth Phoenix, known for being one of the strongest women on the roster prior to her retirement.