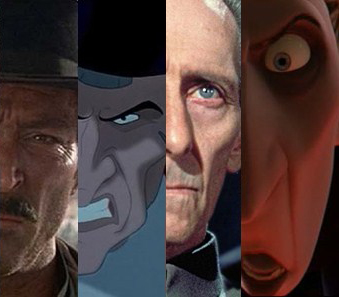 From left to right: Angel Eyes, Judge Claude Frollo, Grand Moff Tarkin, and Anton Ego.
"Hey it's that one Peter jerk again. And this time, he's accompanied by another Peter, Pete Postlethwaite and his killer cheekbones."
— The Nostalgia Critic - The Lost World: Jurassic Park

Look around the room you're in. Notice anyone with particularly prominent, exaggerated, or high cheekbones? Yes? Chances are they're the one out to get you.

Villains seem to have a tendency toward quite noticeable cheekbones. It's far more common in animated works, as facial features are often exaggerated. This trope is quite often seen on The Baroness or the Dragon Lady. It's perhaps because sharper cheekbones lend a face a sharper, more angular look, which can convey intense emotion more easily sometimes, or (as with Lean and Mean) because of the unsettlingly skeletal, deathly appearance it can give you. It's also the opposite of the kind of smoother, softer face known as "baby-faced"—and since a baby-faced person looks like an innocent child, it follows that the prominent bone structure will look like the opposite of this.

Compare Lean and Mean and Evil Is Sexy, if you so desire. Sister Trope to Sinister Schnoz and Thin Chin of Sin. Contrast with the Lantern Jaw of Justice for the good guys.