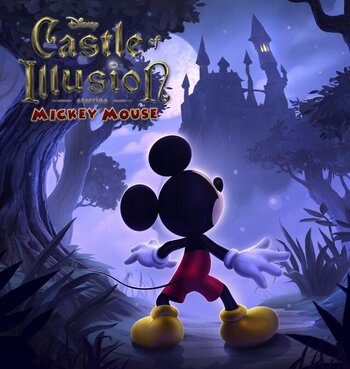 Castle of Illusion Starring Mickey Mouse is a platformer developed by Sega in 1990 for the Sega Genesis and Sega Master System.

The game takes place within the eponymous Castle of Illusion. Mickey must take it upon himself to rescue Minnie Mouse from the clutches of Mizrabel the witch, who has kidnapped her in order to steal her youth and beauty. The player must battle through five stages and confront each stage's boss to collect the Seven Gems of the Rainbow. Only with these gems can he then build a rainbow bridge leading to the castle tower to face the evil witch in a final battle.

Cue classic side-scrolling and all the glory of 16-bit graphics and sound. The 8-bit version, released for both the Sega Master System and Game Gear, keeps the fundamentals of its 16-bit big brother, while altering the level design and mechanics to fit better with the less powerful hardware.

In 1992, it went and had two sequels: Land of Illusion and World of Illusion. A few years later, an additional sequel was released known as Legend of Illusion. 2012 saw a Nintendo 3DS companion game to Epic Mickey 2: The Power of Two going under the name Epic Mickey: Power of Illusion, officially billed as both a fourth, direct sequel and an Epic Mickey game, in which the Castle of Illusion has been transported to the Wasteland and Mizrabel seeks to escape from it by draining the essence of popular Disney characters.

In the wake of this release, Sega made a HD Remake of the original game and was released on the PlayStation 3 on September 3, 2013, while the Steam and Xbox 360 versions were released the following day. The game was delisted from these storefronts on September 2, 2016, due to Sega's contract expiring; it eventually resurfaced in April of 2017. The original version of the game and World of Illusion were both included as a part of the Sega Genesis Mini in 2019.