Spoilers for the movie will be left unmarked. You Have Been Warned! 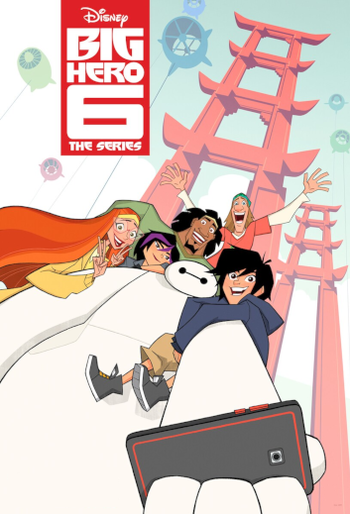 Big Hero 6: The Series is an American animated series based on Big Hero 6, set after the events of the film. It is co-created by Mark McCorkle, Bob Schooley and Nick Filippi, who had previously worked on Disney animated series Kim Possible, the former two having also done several other Disney animated adaptations including Buzz Lightyear of Star Command, Aladdin: The Series, Goof Troop, The Lion King II: Simba's Pride, Tinker Bell and the Legend of the Neverbeast, and so forth.

The series, which picks up immediately following the events of the film, continues the adventures and friendship of 14-year-old Hiro Hamada and his compassionate, cutting-edge robot Baymax. Along with their friends Wasabi, Honey Lemon, Go-Go and Fred, they form the legendary superhero team Big Hero 6 and embark on high-tech adventures as they protect their city from an array of scientifically enhanced villains. In his normal day-to-day life, Hiro faces daunting academic challenges and social trials as the new prodigy at San Fransokyo Institute of Technology.

It is also notable for being greenlit for its second season before it aired, like Tangled: The Series, DuckTales (2017), and Star Wars Rebels, the latter having been revealed later on to have been greenlit as a show entirely rather than season by season, suggesting a similar case for the other shows.

The show properly started in the US on June 9, 2018, while the show had already aired new episodes in the UK and Australia, among others, since March 1, 2018.

, the show was renewed for a season 3 a few weeks before the Season 2 premiere. Season 2 premiered May 6, 2019. Season 3 premieres on September 21, 2020, switching to a format of two eleven-minute episodes instead of the previous half-hour blocks. On January 28, 2021, it was confirmed the third season will be the last, and the show closed out on February 15, 2021.

IDW Publishing announced a comic book series based off of the show in July 2018, but only three issues were published in total over the course of the next two years due to editorial conflicts. Yen Press, who made a manga based on the movie, announced a new graphic novel based on the show that was released on August 17th, 2021. The first issue features the episodes "Issue 188", "Failure Mode", and "Baymax Returns Part 1".