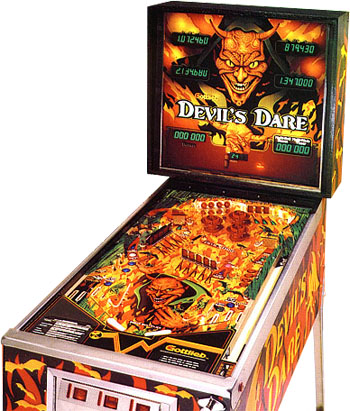 Devil's Dare is a widebody pinball machine released by Gottlieb in 1982. It was designed by Tom Sczfransky and originally illustrated by longtime Williams pinball artist Doug Watson.

As pinball games go, Devil's Dare is a straightforward design of the era — hit the drop target banks to enable the Capture Cave and the Capture Pit, then lock two balls for three-ball multiball play. If you score well during multiball, you'll be rewarded with "Multi-mode", an extra multiball round after multiball ends.

Approximately 3,800 tables were produced, and the majority of them were shipped to Europe without speech support. As such, it's considered something of a rarity in the United States. Fun fact: The pinball table seen in Willy's Wonderland is a retrofitted version of this table.

Has nothing to do with a 2014 Retraux Beat 'em Up of the same name.