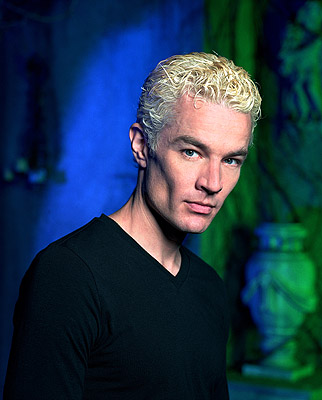 "When you are a hero you are always running to save someone, sweating, worried and guilty. When you are a villain you are just lurking in the shadows waiting for the hero to pass by. Then you pop them in the head and go home... piece of cake."
Advertisement:

James Wesley Marsters (born August 20, 1962 in Greenville, California) is an actor/singer most famous for playing the Ensemble Dark Horse vampire Spike in Buffy the Vampire Slayer and Angel. His other most famous roles are as Milton Fine (Brainiac) in Smallville and Captain John Hart in Torchwood. He appeared on Caprica as terrorist leader Barnabas Greeley, appeared on Warehouse 13 as the Count of St. Germain, and also portrayed Piccolo in Dragonball Evolution. He also has provided the audio performances for all of Jim Butcher's The Dresden Files books to date, and became the voice actor for Zamasu in Dragon Ball Super.

He has been married and divorced twice, once to Liane Davison (from 1989 to 1997), and then to Patricia Rahman (from 2011-2021). His relationship with Rahman drew some controversy due to the large age gap (23 years) between them, and the fact that Marsters had attended her high school graduation (they started dating when she was 17-18 and he was 42).

Tropes associated with this actor's roles: