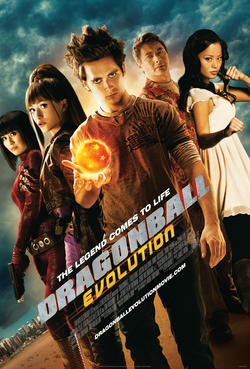 Dragonball Evolution is an American Live-Action Adaptation of Dragon Ball produced by 20th Century Fox and directed by James Wong. The trailer can be viewed here

Goku is a young high school student who must battle the evil space overlord Piccolo and retrieve the Dragon Balls in order to stop Piccolo's massive ape servant, Oozaru. Along the way, Goku loses his grandfather and meets an inventor named Bulma, an aging martial arts master named Roshi, and a bandit named Yamcha.

Akira Toriyama reportedly hated this movie so much that he returned to work on the Dragon Ball franchise to redeem his creation. This was one of the factors resulting in Dragon Ball's revival in the mid-2010s, starting with Dragon Ball Z: Battle of Gods.

It has a Fighting Game adaptation on the PlayStation Portable. Not to be confused with the two unofficial live-action movies based on Dragon Ball, Dragon Ball: The Magic Begins and Dragon Ball: Fight for Victory, Son Goku!.