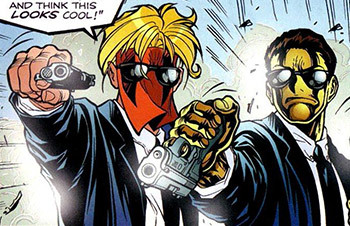 On the right is the "logical conclusion"* It may also not bring Death The Kid to mind.
"Holding the hand crossbow sideways 'gangsta style' does not add to my intimidate check."
— Things Mr. Welch Is No Longer Allowed to Do in an RPG, #1033
Advertisement:

Turning a weapon, frequently a pistol, so its grip is horizontal rather than vertical.

Showy, flashy, and generally useless as a marksmanship technique. Normally, recoil lifts the barrel against gravity. When firing in this manner recoil pulls the gun sideways instead and tends to turn the shooter around in a circle. Additionally, it makes the sights much less useful. Worse, if the pistol is turned in this manner, its ejection port faces up, and the extractor isn't designed to work directly against gravitynote If you're holding it with your right hand, that is. Gangsta Style with the left hand will have the ejection port facing the ground. Sideways recoil and improper extraction combined may make an ejected shell fly out at the wrong angle and hit you in the face, and also increases the chance (especially if you're wearing loose clothing) of getting a shell ejected into your clothes, which is actually not an unheard-of occurrence when firing normally. Bear in mind that, depending on the ammunition and load, the shell can be hot enough to cause small burns on contact with the skin. Spent cartridges are also very likely to not be thrown clear, or even fall back into the port, either of which will jam the gun. All of which may be of some concern to a person who is in the middle of a gunfight.

Visually, it emphasizes the fist of the gunner. In other words, Rule of Cool wins in fiction.

Most probably, the reason why this technique came about is for use in robbing stores. When holding a gun correctly, it is nearly impossible to keep the gun pointed at the clerk should they duck behind the counter without re-positioning your entire body. When holding the gun sideways, however, it is much easier to quickly aim downwards at a ducking clerk. As store robberies are generally carried out at close range, and the gun is more a tool to intimidate the clerk than anything, the loss of accuracy is generally considered an acceptable trade-off in order to keep the target under the gun at all times.

There also seems to be a persistent myth that doing this somehow increases the lethality of the pistol, which makes no sense for the following reasons: 1) How the heck would simply rotating the gun affect the inner working of the gun in such a drastic manner? 2) Even if it was the case, wouldn't guns therefore be designed to be held and professional soldiers trained to hold their guns in such a way?

The technique has sometimes been used with specific guns for practical reasons. For example, it saw much popularity in 1920s China in conjunction with the Mauser C96, where the technique negated the pistol's awkward upwards ejection, and allowed automatic variants to more effectively sweep rooms. Wheellock pistols were routinely held this way to reduce the chance of a misfire. It is the safest method of firing the AK and derivatives when lying prone — due to its awkwardly large magazine, holding the weapon vertically elevates the angle of the barrel upward by a good 20 degrees, which means you have to lift your head well off the ground to look down the sights, presenting a large target for any hostiles and thus defeating one of the points of firing from a prone position. Additionally, it is utilized when you need to shoot around a ballistic shield during a close-quarters forced entry operation.

Combine this one with Guns Akimbo, and you have something spectacular, but God help us all if it goes too far... More Dakka may be employed in an attempt to counter accuracy issues. To slice the Willing Suspension of Disbelief into little bits, have someone pull Offhand Backshots this way... and hit. Without suffering from a sprain and/or dislocated joint after this. A way to make Improbable Use of a Weapon. See also Reverse Grip, for edged weapons.

This trope, along with various other Hollywood gun styles such as Guns Akimbo, was examined by the MythBusters. They proved that both tropes are just as inefficient as you think.

Despite the similar name, has no relation to and is not used in Gangnam Style.

Compare with One-Handed Shotgun Pump, which is Rule of Cool similarly applied to shotguns.