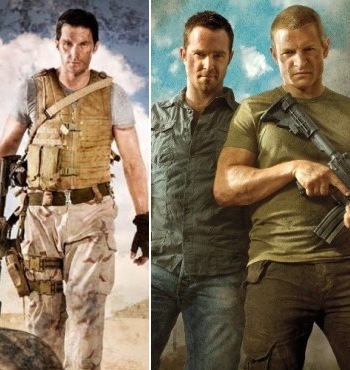 Strike Back is a British/American action series that's aired between 2010 to the present that centers on the members of "Section 20", an MI6/British military intelligence black-ops unit.

The first series, Chris Ryan's Strike Back, (which later aired on Cinemax under the subtitle Origins in late 2013), aired as a six-part miniseries on the UK's Sky Network in 2010. It's loosely based on the Chris Ryan novel and follows John Porter (Richard Armitage), a disgraced former-SAS soldier, who is drafted into service by former comrade Hugh Collinson (Andrew Lincoln), the head of Section 20. Initially recruited to rescue a hostage from terrorists in Iraq and later going on missions in Zimbabwe and Afghanistan, Porter soon learns there's a conspiracy of silence behind the failed mission that led to his dishonourable discharge.

The second series, Strike Back: Project Dawn, ran for ten episodes in 2011 and was co-produced by Cinemax with an entirely new cast and abandoning the storyline set up in the previous series. It follows Section 20's attempts to track down Pakistani terrorist Latif, who is attempting to acquire and use weapons of mass destruction; their efforts are led by Michael Stonebridge (Philip Winchester), a straight-laced SBS trooper, and Damien Scott (Sullivan Stapleton), a disgraced former-Delta operator. The pair are also trying to unravel the mystery of "Project Dawn", which is linked to Scott's unfair dismissal from Delta Force, the final fate of John Porter, and Latif's plan to acquire a WMD.

The third series, Strike Back: Vengeance, is another ten-episode Cinemax co-production and a direct sequel to the previous series, once again starring Winchester and Stapleton, with Rhona Mitra also starring as Rachel Dalton, the new commander of Section 20. In Vengeance, a simple exchange gone wrong puts Section 20 on the trail of nuclear triggers and competing against the forces of Conrad Knox (Charles Dance), a businessmen with an agenda. Stonebridge's semi-retirement as an SAS training officer is shattered when a vengeful former colleague murders his wife, and he returns to Section 20 to seek revenge; meanwhile, Scott is reunited with CIA officer Christy Bryant, who threatens to expose the secrets of his past.

The fourth series, Strike Back: Shadow Warfare, is also ten-episodes, with Cinemax continuing its partnership and Winchester, Stapleton and Mitra reprising their roles. Shadow Warfare begins with Scott and Stonebridge being recalled from vacation in the western U.S. after another member of Section 20 is killed in Lebanon while tracking the terrorist al-Zuhari. While Scott and Stonebridge are deployed in Colombia to recover Zuhari's top lieutenant, Dalton, who was trapped in Lebanon after Section 20's original mission was compromised, begins searching for a rogue MI-6 operative who may have sold the team out to al-Zuhari.

The fifth series, Strike Back: Legacy, premiered in 2015. It was originally planned for 2014 but production had to be delayed after Sullivan Stapleton was involved in a near-fatal accident as the passenger of a tuk-tuk after a night out in Thailand. In this series, Section 20 gets caught up in a North Korean conspiracy as both Scott and Stonebridge start giving serious thought about what they'd do once they're no longer able to go out into the field. This series also takes a back to basics approach, with Section 20 being stripped down until it's just the two of them and Locke trying to save the world on their own.

The Scott-Stonebridge iteration of the show delivered strong ratings through its run. So much so that the producers have begun work on a cinematic adaptation that will feature the two characters.

While the fifth installment was the final one, a sixth series, with a completely new cast and new characters, has been green-lit and started airing in November 2017, with the subtitle Retribution. A seventh season, subtitled Revolution (Silent War in the UK), started airing in January 2019. It's scheduled to end after the eighth season, known as Vendetta.