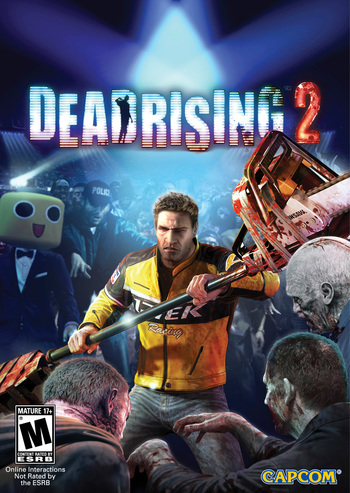 When all you have is a paddle, chainsaws, and duct tape...
"72 hours to kill... thousands of zombies... What would Chuck do?"
Advertisement:

Chuck Greene is a former motorcycle racing champion, whose wife was zombified and bit their daughter, Katey, in an outbreak in Las Vegas some years before. Due to this, now the girl needs daily doses of Zombrex, a medicine that can halt the infection for 24 hours.

Cut to the present day (five years after the first game), Chuck is now a contestant in the game show Terror Is Reality, set in Fortune City, NV, whose crew keeps caged zombies who are released in an arena just so the competitors may mow them down with motorbike-mounted chainsaws.

One day, after another episode of the show, someone releases the captive zombies, and they overrun the city in no time. Having found a shelter, Chuck is informed that the military will raid the city within 72 hours and the shelter isn't stocked with Zombrex, so they only agree to let Katey stay there as long as he can find the medicine to keep her alive.

Eventually, Chuck finds out he's being held responsible for breaking out the horde, and now he's involved in a three-way quest: find Zombrex for Katey, save the survivors left about the city, and clear his name. All the while crushing thousands of zombies with anything he may find - and anything he may make with what he finds.

Dead Rising 2: Case Zero was released a few weeks before the main game, as a five-dollar "demo" available exclusively on the Xbox Live Arcade. Set immediately after the Las Vegas outbreak mentioned in passing in DR2, Case Zero finds Chuck and Katey stranded in a tiny town in the middle of nowhere. Chuck has about fourteen hours before the military moves in to quarantine the town, and if he and Katey aren't gone by then, they'll take her away. Chuck has to find at least one dose of Zombrex for Katey and put together a vehicle.

Dead Rising 2: Case West came out in December 2010 on the Xbox Live Arcade. Set after the main game in Phenotrans's facility in Fortune City, Chuck is joined by Frank West (an AI buddy in single-player, and the second player's character in co-op) as they work to clear Chuck's name once and for all.

Dead Rising 2: Off the Record was announced

at Captivate '11, and Capcom admits that the new game is basically Fanservice (as in Continuity Nods and stuff). Indeed, the wackiness is Up to Eleven (Masked Luchador zombies, for example), and even the beloved photos-for-PP mechanic returns. The game is a What If? Frank West had been in Chuck Greene's shoes, and Frank's simple answer to the question, "What would you have done differently?" is EVERYTHING.

In November 2011, IDW began publishing a four-issue Dead Rising comic book series, Road to Fortune, which begins two years after the original game and covers several of the incidents between DR and DR2, including the Vegas outbreak, Katey's infection, and Frank West and Rebecca Chang's first meeting.

In September 2016, both Dead Rising 2 and Off the Record received re-releases on PS4, Xbox One, and PC, alongside the original Dead Rising.

The list of Shout Outs can be found here. 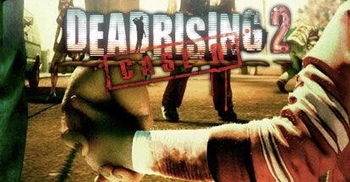 Daddy? There’s a man over there.. 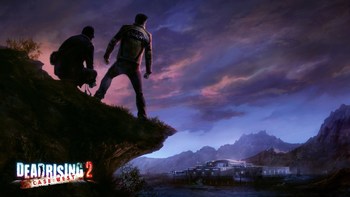 A southern mall security guard gone mad. Redding believes he's a sheriff and uses his badge as an excuse to start hanging innocent people like it's the Old West.

A southern mall security guard gone mad. Redding believes he's a sheriff and uses his badge as an excuse to start hanging innocent people like it's the Old West.