Wrestler in All of Us 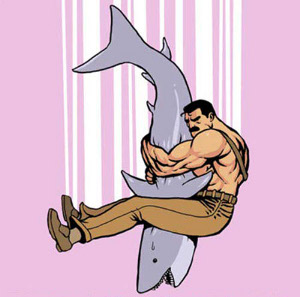 Know a better way to beat up a shark?
Advertisement:

Ever notice that pro wrestling moves pop up in the strangest places?

This is usually prevalent in video games, especially beat 'em ups. In your average beat 'em up, throws are compulsory, yet the throws in most real martial arts (including real wrestling) aren't all that eye-catching. And some martial arts don't have throws at all. So where can the designers find throws that are more interesting? Good ole pro wrasslin'. A nice solid suplex or perfectly executed armbar can help convey untold amounts of badassness to a character as the viewer watches them delivering maximum ouch factor. This might be explained by the Japanese love of pro wrestling.

In general, if a character in a Fighting Game specializes in grapples, most of them will be of this variety.

Of course, in Real Life, such throws usually require the opponent to at least allow it to happen, and most of them require the person being thrown, suplexed, etc., to actually assist in the attempt. This means that these moves would be very easily countered by a resisting target, and would thus be pointless to use in a real combat situation. However, one of the most commonly seen moves, the German Suplex, can be delivered to a struggling/actively resisting opponent, but it is never as clean as you'd think, although some professional wrestlers have demonstrated the strength to perform a "deadlift" (unassisted) German Suplex.

May be part of a Grapple Move or Meteor Move. See also Suplex Finisher and Spinning Piledriver. Contrast Just Hit Him, where throws are inexplicably ineffective.