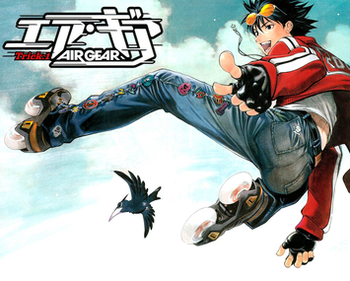 Shonen manga by Oh!Great, adapted into an anime series, loosely based on inline skating.

The creation of borderline-magical self-propelled inline skates, called "Air Treks" or "A-Ts", has revolutionized skating culture around the world, as teenagers push the limits of the skates to Charles Atlas Superpower levels of Roofhopping and Le Parkour. Itsuki Minami — "Ikki" to his friends – is an Ordinary High School Delinquent who runs his own gang — The East Side Gunz — and lives with the four Noyamano Sisters as a dependant, a roommate, and a house boy. Though he admires the Storm Riders, especially Simca, a beautiful, skilled, and somewhat manipulative rider, he is kept from becoming involved in the A-T world by the demands of leading his gang and a lack of spending money to buy A-Ts. However, one day a gang turf war goes horribly wrong when the Gunz' rivals recruit a notoriously vicious Storm Rider team called the Skull'Saders, who beat and humiliate Ikki. In his darkest hour, Ikki's roommates reveal the secret life they have been leading and introduce him to the Storm Rider World. He displays unusual talent with A-Ts and soon defeats the Skull'Saders and founds his own team: Kogarasumaru.

Ikki is swept into a brutal world and quickly thrown into the spotlight when Simca declares he will be the next Sky King, the Storm Rider acknowledged to be the most skilled rider in the world. Ikki, ignorant of the significance of this proclamation, runs with it and soon begins to challenge other teams in a semi-organized tournament called the “Parts War,” in which teams challenge and fight each other, betting either A-T parts or their team emblems on the matches. Detailed info on the Parts War can be found at this link

. After winning a few matches with the help of his childhood friend Ringo Noyamano, Ikki learns more about the A-T World: there are 8 roads — specialized riding styles — that will allow one to rise to the top of the Storm Rider World, and each road possesses specialized and extremely powerful A-T parts called Regalias that unlock the true potential of a rider who is skilled enough to use them. Those who currently possess the Regalia are known as the 8 Kings, the masters of their chosen roads. This status provides the Kings with no real authority, but successfully claiming the title of King bestows amazing prestige upon the claimant.

Because Simca recognizes great potential in Ikki, she tries to recruit him into her team of elite Storm Riders, Genesis. This puts her at odds with Ringo and the other Noyamano sisters, who are members of the legendary Storm Rider team that stands over the A-T World: The Sleeping Forest. Few are actually certain the team exists, and even fewer are aware of why it exists, but one thing that is made clear is that they are firmly opposed to Genesis. While Simca wants to bring Ikki into conflict with The Sleeping Forest and lead Genesis to victory, the Noyamano sisters would rather Ikki stayed on the sidelines, but are willing to reluctantly attack him if he sides against them. As both sides become more and more aggressive towards each other, Ikki finds himself forced to choose a side in their war.

Refusing to be used, Ikki declares his independence of both teams and of the current eight roads, choosing to ride his own unique road — The "Hurricane Road" — as its Storm King.

The manga was serialized in Weekly Shonen Magazine from 2002 to 2012. It was adapted by Toei Animation into an anime in 2006, directed by Hajime Kamegaki (who also directed Fushigi Yuugi and Sonic X). 25 episodes were originally aired by TV Tokyo, with one more exclusive to DVD. ADV Films produced an English dubbed version starring Chris Patton and Luci Christian as Ikki and Ringo. A set of three OVAs, produced by Satelight Animation and directed by Shinji Ishihara was released in 2010, but they were not picked up by any American distributors.

In December of 2015, an unexpected one shot epilogue was made taking place six months after the main events of the story.