Series / The Adventures of Ozzie and Harriet 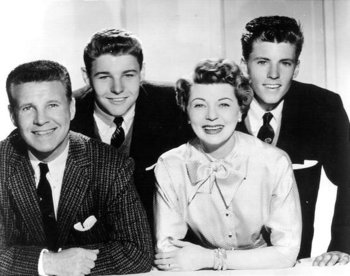 From left to right: Ozzie, David, Harriet, and Ricky.
Advertisement:

The Adventures of Ozzie and Harriet is an American sitcom that aired on ABC from 1952 to 1966, and starred the real-life Nelson family: bandleader Ozzie Nelson; his wife, singer Harriet Nelson, and their sons, David and Eric "Ricky" Nelson. While it was classic Dom Com comparable to Father Knows Best or Leave It to Beaver, the show's setup was an unintentional bit of Postmodernism: the Nelsons played fictional versions of themselves, with the show's house set based very precisely on the Real Life Nelson house, right down to the same furnishings.

Notable for being the longest-running live-action American sitcom, until It's Always Sunny in Philadelphia surpassed it in 2019.