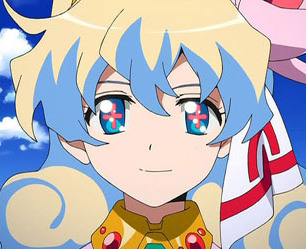 Mikoto Misaka: What's up with your sparkling eyes? You think this is a shojo manga?!
Misaki Shokuhou: I was born with them! Weren't you ever taught not to make fun of other people's bodies?
— A Certain Scientific Railgun
Advertisement:

Everyone buzzes about eye colors; they look good and they can be used to determine how a character might act like, but what about the rest of the eye? That's where this trope comes in, where characters can have vastly different pupil shapes and/or sclera colors, with the optional, but corresponding eye shadow. The reasons could vary from just being an added level of exoticism, to a condition (sickness or otherwise), a reaction to something, or a way to identify that they're not entirely human. The iris' inclusion only counts if they intentionally change color as a response to something.

Technicolor Eyes is the subtrope when it's the colors of any part of the eye that are different.