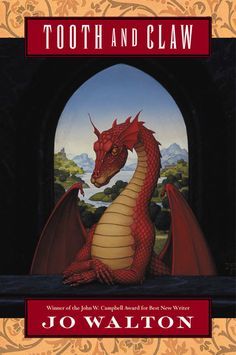 "I want to confess, Penn, before I die. Will you hear my confession?"
Advertisement:

A fantasy novel by Jo Walton, published in 2003 and winner of the World Fantasy Award for Best Novel in 2004.

Tooth and Claw is an homage to Victorian novelist Anthony Trollope. It follows the narrative structure and character archetypes one would expect of a Victorian-era novel, apart from the fact that the entire cast are dragons. This alone opens up an entirely different take on social structure and custom. Notably, confession and absolution are regarded a high form of sin, and it is customary to feast upon not only the deceased, but any perceptibly weaker dragons whose continued existence is regarded as a degradation of the species as a whole.

The novel follows the immediate aftermath of the death of a dragon clan's patriarch, the ensuing trouble upon dividing up his family's inheritance, and the consequences in seeking reparation thereof.

It is a considerable mistake to imagine the actual events are at all mundane based solely upon their synopsis.