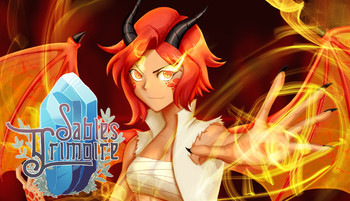 Sable's Grimoire is a 2018 visual novel created by Zetsubou. In a world featuring magic, modern technology and multiple "demihumans" (sapient non-human species) a young human mage called Sable has just been accepted into Amadronia Magic Academy. He is hoping to spend the next three years peacefully studying magic theory, designing spells and getting to know the school's demihuman population. Unfortunately he quickly discovers that Amadronia's reputation as the premier school of magic may have been rather overrated. His teacher barely bothers to teach, his fellow students mostly don't trust him due to his being human, the principal is more interested in his political agenda, and many people at the school seem terribly dangerous. Sable will have to tread carefully to find his place or even survive.