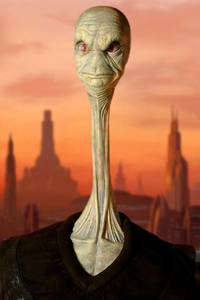 "What's that about Silly Putty?"
Advertisement:

One way of making a character look bizarre or comedic is to give them a long neck. They can be born with it due to some strange birth defect, acquire it temporarily due to Amusing Injuries, or simply belong to a species that naturally has one: giraffes, geese, swans, sauropod dinosaurs, snakes, tortoises, or even aliens.

In comedic stories, a long neck is usually stretched out by accident. The neck can be fully erect, or it can be bent into all kinds of shapes like a snake. Long-necked characters are usually able to see things from great distances. Or when swimming, they're able to use their neck as a periscope. Disadvantages of this condition are that the character's neck will frequently be tied in knots or bump against lower objects or people.

On the other hand, in women, a subtly long neck is sometimes seen as a sign of beauty. There are cultures where women artificially lengthen the appearance of their necks by wearing heavy necklaces. Compare Statuesque Stunner.