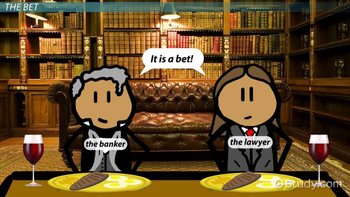 In its simplest formnote The lawyer has just bet the banker that he can remain in solitary confinement for 15 years.
Gambler #1: I'll never make another bet in my life!
Gambler #2: Three-to-one you do.
Gambler #1: You're on!
Gambler #2: You lose.
— Rocky and Bullwinkle

Some people will do just about anything for a bet, so wagers are a great excuse to have characters do just about anything. Just have someone bet them they won't. Regardless of how crazy the challenge, and how disproportionate (or nonexistent) the reward, they will go to any lengths to win. Maybe they want to show up their rival or make a point or maybe they just want to win the reward. Either way they're sure to have a whole lot of adventures trying to succeed, especially if their rival is trying to sabotage their efforts. And just maybe they'll end up learning that there are some things that are more important than winning the bet.

Examples only count when the bet is a major part of the story, if not the whole reason for the plot. So if The Hero and The Rival have a bet on who will win the sports tournament they've entered, that doesn't count because winning the tournament is the objective, the wager just adds to the rivalry. It doesn't have to be the main characters who make the bet though, they could equally be the ones being bet on, so long as the bet is the reason for the plot. May be made by the Professional Gambler or The Gambling Addict, or be part of an Absurdly High-Stakes Game. More minor examples may count as a Side Bet.

A common Romance or Romantic Comedy version of The Bet is when a character is bet that they won't/can't win over/date/sex up a certain lady. The guy will almost inevitably end up developing genuine feelings for the girl, and the girl will just as inevitably be pissed off when she finds out about the bet. This may lead to The Grovel when he asks for her forgiveness.

Compare to On One Condition, which is essentially a dead person betting their estate that you won't fulfill the conditions of the will. Also see Humiliating Wager.

In Season 8 "Something Old, Something New, Something Bob Caters for You", the Belcher kids make a bet on who can appear in the most wedding photo where the loser has to clean the grease trap of the grill.

In Season 8 "Something Old, Something New, Something Bob Caters for You", the Belcher kids make a bet on who can appear in the most wedding photo where the loser has to clean the grease trap of the grill.