Series / The Adventures of Superman 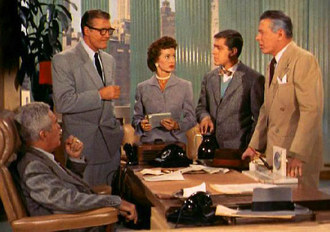 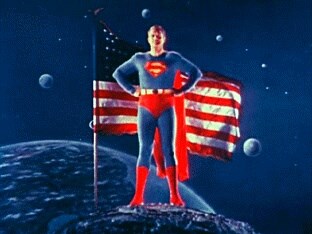 Oh, there he is.
"Faster than a speeding bullet! More powerful than a locomotive! Able to leap tall buildings at a single bound! ("Look! Up in the sky!" "It's a bird!" "It's a plane!" "It's Superman!") Yes, it's Superman! Strange visitor from another planet who came to Earth with powers and abilities far beyond those of mortal men! Superman! Who can change the course of mighty rivers, bend steel in his bare hands, and who, disguised as Clark Kent, mild-mannered reporter for a great metropolitan newspaper, fights a never-ending battle for truth, justice, and the American way!"note And now, another exciting episode, in The Adventures of Superman!
— Opening Narration
Advertisement:

The first Superman TV series, running from 1952 to 1958 and starring George Reeves as the Man of Steel. The supporting cast included Phyllis Coates and later Noel Neill as Lois Lane, Jack Larson as Jimmy Olsen, John Hamilton as Perry White, and Robert Shayne as Inspector Henderson. Those actors that were still alive often had cameos in more modern Superman projects. This show is the way most children in the 1950s were introduced to Superman, and also the main reason that Jimmy Olsen got his own comic book.

The show was produced during the Mort Weisinger era of Superman comics, and he and Whitney Ellisworth were even on the staff. As a result, a lot of the plots are carbon copies of comic book stories from the time (for example, the story "The Phantom Superman" became the episode "Superman in Exile".) As a result, the series is probably the purest adaptation of late golden/early silver-age comic books out there.

The later TV series Lois & Clark is also known as "The New Adventures of Superman", following this show's title. Several episodes of this show were adapted for the first few episodes of Lois & Clark's first season.

Sadly, the series is now mostly remembered for George Reeves' mysterious death,note Fans are still arguing about whether it was murder or suicide which formed the basis of its own movie: Hollywoodland, where he was portrayed by Ben Affleck.

In addition to all the Superman tropes, this series provides examples of: