Recap / Asterix and the Laurel Wreath 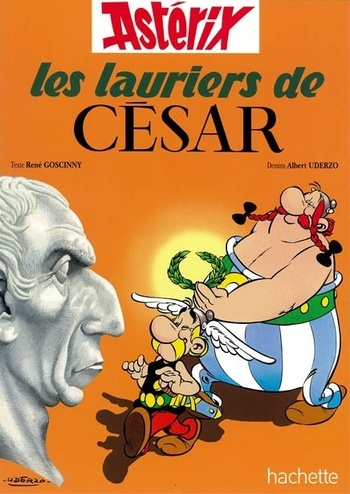 An unwilling Asterix and Obelix have accompanied an even more unwilling Vitalstatistix on a visit to Lutetia with his wife, Impedimenta, to see her wealthy and uppity brother, Homeopathix, who has always looked down on Vitalstatistix. Over the course of the evening, Vitalstatistix gets very drunk and, tiring of Homeopathix's snobbery, bets him that he can cook him something he's never eaten before—a stew flavoured with Julius Caesar's laurel wreath. The equally drunk Obelix declares that he and Asterix will go to Rome on the chief's behalf to get the wreath, and Homeopathix decides to take him up on his boast.

Flash back to the present; Asterix points out to Obelix that their usual tactic of marching in and beating up every Roman they see will not work with the crack troops guarding Caesar's palace. They notice a man leaving the palace; plying him with drink, they learn he is a slave, purchased from Typhus, Caesar's personal supplier. They decide to offer themselves as merchandise to Typhus, but when the other slaves on Typhus' stand dismiss them as cut rate junk, a fight breaks out, with Asterix and Obelix triumphant. An amused patrician offers to buy the two Gauls, who assume he is Caesar's major-domo (whom Typhus has been expecting at any minute) and that they are finally on their way to Caesar's palace.

However, the patrician, Osseus Humerus, has actually bought the Gauls as slaves for his own household, which includes his wife Fibula, his daughter Tibia, and his alcoholic son Gracchus Metatarsus; they quickly earn the enmity of Humerus' own major-domo, Goldendelicius, who is determined not to let these fragile Typhus trinkets replace him. Asterix and Obelix, however, are more interested in getting Humerus to return them to Typhus to be bought by Caesar, and try everything they can to get the sack. They throw everything in the kitchen into a disgusting stew, but this only succeeds in curing Metatarsus' hangover. They march through the house in the middle of the night banging pots and pans, but they only inspire the family to have a loud, drunken party.

Fortunately for the Gauls, Humerus has business at Caesar's palace the next day; as he is too hung over from the previous night's party to go himself, he sends the delighted Gauls in his place. However, Goldendelicius, ever more paranoid about being replaced as major-domo by Typhus' museum pieces, has gone ahead of them and reported them as assassins plotting to murder Caesar; reasoning that at least they'll be in the palace at last, Asterix plays along, and they are arrested and imprisoned. That night, they break out of their cell and search the palace for the laurel wreath in secret, knocking out every guard they pass as quietly as possible. The search turns up empty, and they return to their cell with plans to continue the next night.

The next day, the guards regain consciousness and find the palace in disarray but the Gauls still in their cell; suspecting them of wizardry, the panicked Romans schedule their trial for that very day, and the lawyer Nisiprius arrives to defend Asterix and Obelix. He notes their conviction is assured, and Asterix is intrigued to learn that this will mean being thrown to the lions in front of Caesar himself. As the trial's verdict is already known, Nisiprius plans to use it as a chance to show off his oratory skills, but when the prosecutor begins to give the same speechnote Actually the first of the Catiline Orations, Nisiprius tries to have the trial postponed. The judge and prosecutor are about to agree to the request when the impatient Asterix interrupts and makes an impassioned plea to the court that their crimes - wrecking Typhus' stand, getting into Humerus' house under false pretences to get closer to Caesar to assassinate him - cannot be overlooked, and the emotionally overwhelmed court sentences them to be thrown to the lions.

On the day their sentence is to be carried out, Asterix takes a swig of magic potion on the way to the arena so that he and Obelix can grab Caesar's laurels and then fight their way out. However, the jailer reveals that Caesar is away fighting the pirates, and so Asterix and Obelix refuse to go into the arena. The animals end up devouring each other, and the enraged crowd starts a riot, during which the Gauls escape.

Sleeping rough on the streets of Rome, they are nearly attacked by a group of thieves; impressed by Obelix's strength in rebuffing their attempted theft, they decide to recruit the two Gauls into their gang, and the next night they are ordered to rob a young drunk. The drunk turns out to be Humerus' son Metatarsus, who is ecstatic to see them again. After thrashing the bandits to save Metatarsus from harm, Asterix and Obelix learn that he has been celebrating with Goldendelicius, who was made Caesar's personal slave after denouncing the Gauls as assassins, and will be holding Caesar's laurel wreath over his head during his triumphal procession after his victory over the pirates.

Metatarsus directs the Gauls to Goldendelicius in exchange for the recipe for their accidental hangover cure. Asterix and Obelix corner the still drunk Goldendelicius and force him to give them the laurel wreath in exchange for a parsley wreath. No-one notices the difference during the triumph... except perhaps for Caesar himself, who feels strangely like a piece of fish.

Back in the village, Homeopathix is finally sitting down to the stew flavoured with Caesar's laurels as Vitalstatistix enjoys his victory. However, the unimpressed Homeopathix begins criticising the cut of meat used in the stew, and the chief's anger finally boils over as he punches his brother-in-law sky high. The dazed Homeopathix lands in front of the bound Cacofonix, who wonders if Homeopathix was also punished for trying to sing, while the concluding narration notes that the Gauls' hangover cure led to a surge in drinking among the Romans, and ended up causing the decline and fall of the Roman Empire.